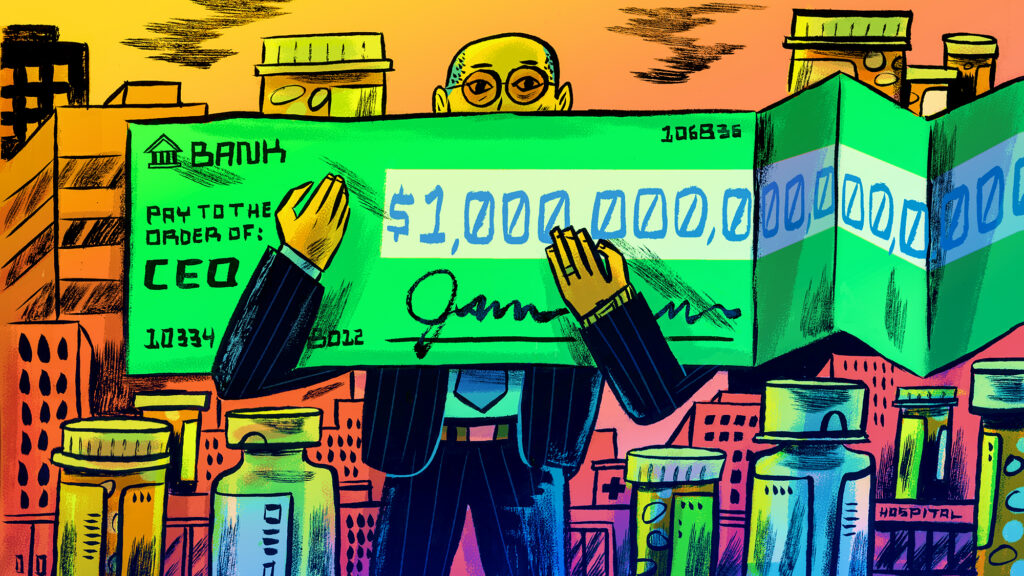 Health care’s top executives sat comfortably atop their perch during the second year of the pandemic, cushioned more than ever by the rising fortunes of their stock ownership.

The CEOs of approximately 300 health care companies collectively took home more than $4.5 billion in 2021, according to a STAT analysis of hundreds of financial filings. Regeneron Pharmaceuticals CEO Leonard Schleifer represented 10% of that total on his own, pulling in an astounding $453 million.

Although $4.5 billion is only 0.1% of the $4.3 trillion U.S. health care economy, it still represents a vast amount of wealth for a small class of executives that wields enormous control and influence over the health care system. The lavish pay packages — which have swollen over time, as profits and stock prices have soared — tower above the average annual household income of around $67,000, as well as the relatively high salaries of health care’s rank and file. And while more than 100 CEOs collected eight-figure paydays last year, the health care system pushed millions of people into medical debt, spurred patients to ration medications, and devoured more of everyone’s paychecks.

“Health care has become big business,” said Drew Altman, CEO of the Kaiser Family Foundation. “We have a lot of people making a lot of money in health care, and we still have an affordability crisis in health care.”

For context, that $4.5 billion is seven times what the Centers for Disease Control and Prevention had to spend on studying, surveilling, and managing emerging and zoonotic infectious diseases in 2021, a year in which America approached 1 million cumulative deaths due to Covid-19. It’s also enough money to cover the annual health insurance of roughly 580,000 individual people.

Put another way, that amount is more than twice the amount of all pizza sales and other global revenue that flowed through pizza chain Papa John’s last year. It’s almost enough money to buy the Denver Broncos and more than enough money to bid on the Cedar Fair chain of amusement parks and hotels.

“The health care system isn’t working as well as it could or should for most people,” said Katie Martin, president of the Health Care Cost Institute and a former federal health official. “Does this compensation structure incentivize these folks to make the system work better, or does it incentivize them to keep the system the same — keep it chugging along as it does now?”

STAT analyzed executive compensation found in the annual proxy filings of nearly 300 companies across all health care sectors — drugmakers, health insurers, hospitals, other providers, medical device firms, health tech companies, biotechs, suppliers, and more. The analysis focused on companies that were worth at least $1 billion in mid-March, based on data from markets and financial database providers Sentieo and FinViz.

The data revealed nuances within each sector: The highest-paid CEOs often led pharmaceutical companies and medical device firms — all of which develop new products and build their businesses around government-granted patents. CEOs of biotechs and startup medical device firms had relatively smaller compensation packages, as their big paydays often come when larger companies buy them out.

Health insurers, hospitals, and other providers minted sizable paydays for top executives, but the ranges were more variable and were larger at more established companies. Most, but not all, CEOs of health tech companies were not among the highest earners because their companies are still new to the public markets, and therefore their stock has had less time to grow. Along those same lines, CEOs who have been at their companies for a long time had some of the largest payouts.

Biotech executives pull in some of health care’s biggest paydays, with Regeneron’s CEO sitting atop the pack

One fact that hasn’t changed: Women rarely sit in the corner office, and when they do, they don’t make as much. Women comprised less than 10% of health care CEOs, and the highest-paid was Caren Mason of Staar Surgical, who made $37.3 million — 32nd-highest within the analysis. Out of the 100 highest-paid CEOs, just six were women.

Health care CEOs made an average of $15.3 million last year, while the median was around $7 million. Several inordinately large pay packages skewed the averages: 29 CEOs, all men, made over $40 million or more.

Salaries made up less than 6% of pay. Helmy Eltoukhy, co-CEO of liquid biopsy firm Guardant Health, for example, took a salary of just $1. Vivek Garipalli, CEO of health insurer Clover Health, didn’t take any salary. Instead, the bulk of executives’ pay stemmed from equity. More than 80% of the overall group’s compensation came from stock awards and options, which reflected the stock market’s colossal gains in 2021.

“There’s just a lot of evidence of misplaced priorities and incentives,” said Katherine Hempstead, a health policy expert at the Robert Wood Johnson Foundation. “Even though health care is heavily regulated, it’s not regulated in ways that prevent companies from doing all these things that don’t really seem to be in the public interest, whether it’s high CEO pay or different kinds of anticompetitive behavior or gaming or different kinds of rent-seeking activities.”

To calculate the true amount of money an executive accumulated in 2021, STAT reporters manually entered information from proxy filings into an open-source tool developed by the Associated Press. The totals included salaries, bonuses, perks, and the actual realized gains of executives’ stock awards and options — not the estimated fair value of stocks handed out in a given year.

Executives are often given stock — or the opportunity to buy stock — as part of their pay packages, and companies are required to estimate how much those shares or options might be worth. This is what is most commonly reported. But the amount of money that executives ultimately collect from exercising vested stock awards and stock options, known as “actual realized gains,” often dwarfs those fair-value estimates and is a more accurate representation of someone’s compensation.

For example, Joe Hogan, CEO of Align Technology, the maker of Invisalign teeth straighteners, made $21.6 million last year based on the fair-value estimate of his stock. But Hogan’s compensation was $113.4 million after calculating his stock that actually vested and was exercised last year — a difference of more than $90 million.

This works the other way, too. Vivek Garipalli of Clover Health had a pay package of almost $390 million last year based on the fair-value estimate of his stock. But in reality, he didn’t get a dime of that. That stock’s value is tied to guesses of how much the stock will be worth in the future, like hitting certain prices by 2026. Given that Clover’s stock price has cratered since it went public in 2021, Garipalli’s compensation wasn’t remotely close to that headline figure.

The 2021 crop of CEOs stood out for one particular outlier: Regeneron’s Schleifer, who is always among the highest earners. On paper, Schleifer is worth billions. Now, a lot of his equity is starting to vest, to significant degrees.

In 2021, Schleifer’s haul of almost a half-billion dollars mostly stemmed from realized stock options. Since 2012, Schleifer has made $1.3 billion. By comparison, the median employee at Regeneron made a little more than $149,000 — about 3,500 times less than Schleifer.

Schleifer isn’t one to fly under the radar, either personally or professionally. He owns mansions on Martha’s Vineyard and Chappaqua, N.Y., and also helped fund his son Adam’s failed congressional campaign. He used to golf with former President Trump at the latter’s country club in Westchester, N.Y.

His company has developed injectable treatments for cancer, eye, and autoimmune diseases, and has consistently ranked among the industry leaders in profitability. He’s also criticized his own industry for raising prices and playing patent games. During the pandemic, Regeneron created an effective monoclonal antibody treatment for Covid-19 patients, including Trump, but that therapy stopped working against the Omicron variant.

Regeneron did not make Schleifer available for an interview. In a statement, Regeneron said Schleifer is “the founder of Regeneron and one of the longest-serving CEOs in the S&P 500.” Regeneron added “the company’s stock price has increased over 3,200% since our IPO, creating immense value for shareholders.”

“Your calculation largely reflects Dr. Schleifer’s exercise of stock options that increased in value alongside the value of the company over time and that were about to expire after a 10-year holding period,” Regeneron said in its statement.

Want to read more about the highest-paid CEOs in the biotech, health tech, insurance, providers, and medical device industries? The links below will take you to STAT’s sector-by-sector analyses.