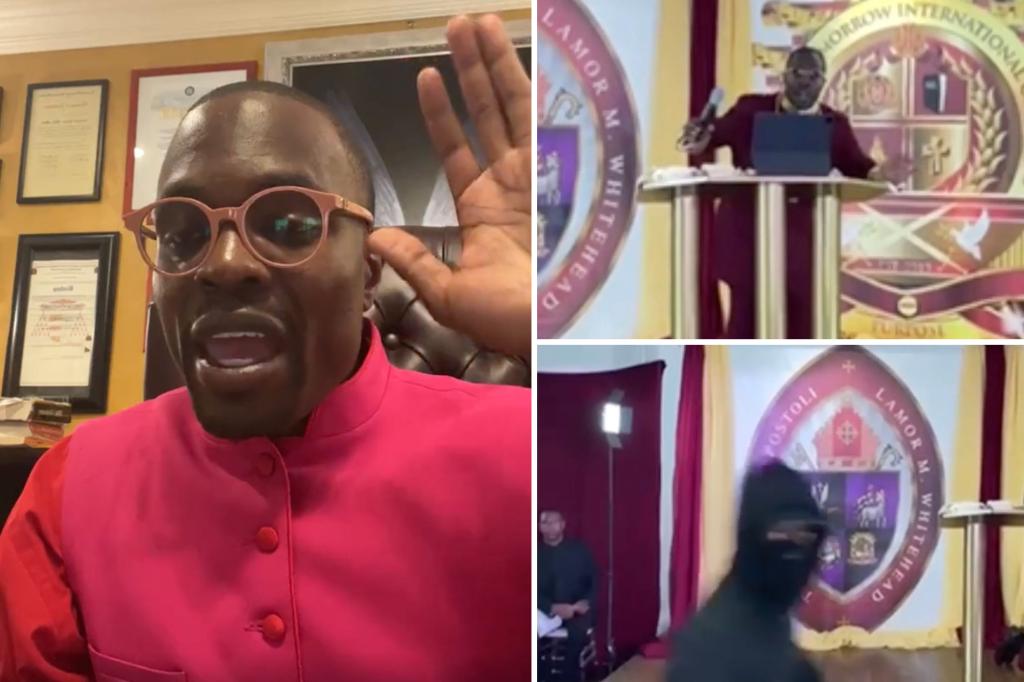 A flamboyant Brooklyn bishop who was robbed in a $1 million jewelry heist during a livestreamed service has defended himself against critics who say his high-profile lifestyle made him an obvious target.

Bishop Lamor Miller-Whitehead — who along with his wife was robbed of watches, chains, rings and earrings as he delivered a sermon Sunday at the Leaders of Tomorrow International Ministries in Canarsie — insisted on Instagram, “It’s not about me being flashy.

Miller-Whitehead — who has ties to Mayor Eric Adams and previously did five years in prison for identity fraud and grand larceny — recalled the moment three assailants robbed him and his 38-year-old wife in the caught-on-video theft.

“When I see them come into the sanctuary with their guns, I told everybody [to] get down, everybody just get down,” Miller-Whitehead said in one of two lengthy Instagram videos he posted late Sunday. “I didn’t know if they wanted to shoot the church up or if they were just coming for a robbery.”

The suspects were all wearing masks, but Miller-Whitehead said he could see their faces.

“They took all of my wife’s jewelry and took all of my jewelry, and then they left,” the bishop said, adding that he was even robbed of his wedding band. “However, these young men didn’t know that cameras were on, and we know what car you were driving.”

The three suspects fled in a white Mercedes, Miller-Whitehead said. He said he saw them change their clothes in the car as he futilely ran after them. They are still in the wind, police said Monday.

“For you to kick in a church door and come with guns in the middle of service — what God is gonna do to y’all is above my paygrade,” the bishop said of the suspects while shaking his head.

Miller-Whitehead, who said he understands the “rules of the streets,” called on the public to submit any tips to the NYPD.

He downplayed criticism of his blinged-out look with “material things” that might have made him an outsized target.

“Sometimes when you’re a known bishop, it’s a gift and a curse,” Miller-Whitehead said. “You become the talk of the town.”

Miller-Whitehead said his congregation, especially women, were “traumatized” over the brazen robbery.