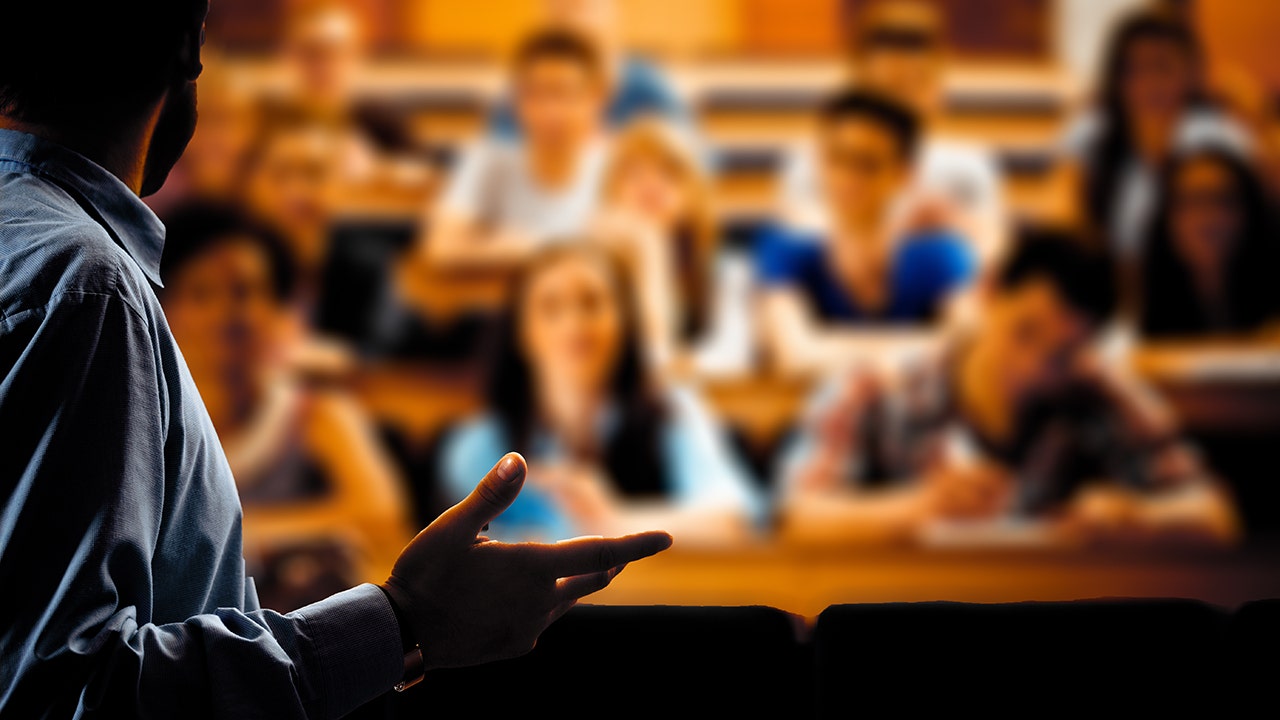 Some universities across America are requiring compliance from faculty in the form of signed diversity, equity and inclusion (DEI) statements, as conditions for tenure or promotion — arguing that DEI across college campuses is a top priority.

However, there may be growing pushback in some areas from faculty as well as from parents — who claim that the DEI agenda actually challenges the diversity of viewpoints and opinions of students within the college environment.

Some say it also promotes a culture of fear and intimidation.

In the city of Seattle, for example, roughly 40% of the University of Washington’s faculty recently rejected — or abstained from voting on — a measure that would have required faculty members seeking advancement to provide a statement demonstrating their support of DEI.

“The fact that [the vote] was stopped is unprecedented,” Cliff Mass, a professor of atmospheric sciences at the university and an advocate for viewpoint diversity, told Fox News Digital in a phone interview.

The University of Washington’s campus in Seattle in springtime.
(Wolfgang Kaehler/LightRocket via Getty Images)

Fox News Digital reached out to the University of Washington for comment.

Victor Balta, senior director of media relations at the school, said, “My understanding is that the legislation failed despite earning over 63 ‘yes’ votes among those cast, which was a margin of 26 points over the ‘no’ votes.”

Balta noted that faculty code requires that “Class A legislation earn a two-thirds supermajority of votes in instances where fewer than 50% of the faculty actually cast ballots.”

Students who hold even moderate viewpoints are often afraid to express themselves on campus today, one professor says.

“Viewpoint diversity is part of diversity, equity and inclusion, and we don’t believe they are in conflict,” he also told Fox News Digital.

“Our campuses should be, and are, places for thoughtful and rigorous exchanges of ideas.”

15 OF THE WILDEST, WACKIEST COLLEGE CLASSES TAUGHT IN AMERICA TODAY

Yet for Mass and others who say they desire a true diversity of thought restored in the college campus environment, the failed measure appears to be a win.

The University of Washington’s campus in Seattle.
(Wolfgang Kaehler/LightRocket via Getty Images)

“One political viewpoint is being pushed very hard by the administration and by a number of others,” said Mass, who is also a meteorologist.

To him, he added, “diversity statements” appear very much like “the anti-communist loyalty oaths of the late 1940s and early 1950s.”

Students who hold even moderate viewpoints are often afraid to express themselves, he said.

“Requiring all faculty members to support a social/political agenda favored by one segment of society not only politicizes the university, but represents ‘compelled speech,’” he noted recently in a blog post.

It’s “a violation of the First Amendment of the U.S. Constitution at a public university,” he added.

Students at the University of Washington campus in Seattle in March 2020.
(Karen Ducey/Getty Images)

DEI advocates are said to focus not on equal opportunity, but on the ideology of equal outcomes or equity.

Fox News Digital reached out to two other colleges that seem to endorse DEI initiatives, according to their websites.

Mass addressed the DEI agenda of many of them.

“They believe that the university should be biased in its admissions and resources to ensure equal outcomes for all groups, with particular attention to a small number of favored ‘unrepresented’ groups,” Mass told Fox News Digital.

“I suspect most parents don’t understand what’s happening here,” he said. “Parents that we serve are from the whole state. There’s a wide variety of political views from people who send their kids here.”

The University of Washington in Seattle.
(Wolfgang Kaehler/LightRocket via Getty Images)

“Then there’s people from outside. We have a lot of foreign students,” he added. “They’re coming here to get a good education.”

Mass said he believes that parents have a huge role to play in limiting the DEI agenda on campus.

“There are a lot of tools to pressure the university — and if they did, it would have an impact,” Mass predicted.

Rebecca Friedrichs, a California-based mother of two grown sons, told Fox News Digital that parents may be “unaware of the destructive nature of DEI.”

She said that “DEI proponents (and their allies) use linguistic gymnastics to change the very meaning of words, in order to manipulate the masses into believing propaganda.”

“DEI is dangerous … and many parents don’t discover this destructive agenda until it’s too late.”

“We collectively understand the word ‘diversity’ to include respectful debate of diverse opinions, open and honest discussion, respect for others, even when we disagree.”

Rebecca Friedrichs is a co-founder of Kids and Country, a national movement of parents, teachers and citizens.

“So, when the university announces it is ‘diverse,’ we think, ‘That’s positive,'” noted Friedrichs, who is a co-founder of Kids and Country, a national movement of parents, teachers and citizens.

DEI advocates “misuse our trusted words,” according to Friedrichs.

“Their definition of ‘diversity’ is twisted and is the exact opposite of our understanding,” she said. “Their ‘diversity’ accepts only their group-think opinions, their stifling of true debate, their silencing of diverse ideas and their tyrannical control of all content.”

“DEI is dangerous,” she said, expressing her opinion — “and many parents don’t discover this destructive agenda until it’s too late.”

Parents may consider talking with their kids early — before they head to college — about their values and how can they express themselves.
(iStock)

Friedrichs encouraged parents to boycott universities that promote the DEI agenda to “stop the madness.”

“Trades are a great alternative for many students,” she said, as opposed to the four-year university degree — “and can lead to much satisfaction and high wages without the burden of school debt and indoctrination.”

Talk with your kids before they go off to college

It’s important for parents to start talking with their children early, said Alvord, before they head off to college, about their values and how can they express themselves.

“The reality is that we are a diverse world,” said Alvord.

“But in addition, we have differing views and people do get upset with what’s ‘politically correct’ or ‘politically incorrect.'”

She said college students are at a place in their lives where they’re fine-tuning their own personal and family values. They should also “be open to different ideas and hopefully find some venues” where they can express themselves and even “disagree with [issues],” said Alvord.

“Look for … professional educators and stick with them.”

Another tool for parents, according to Friedrichs, includes vetting student syllabi, which are public documents.

Friedrichs pointed out, “There are often good educators who are trapped in politically driven universities — so look for those professional educators and stick with them.”

Remind young people to be thoughtful

If teens or young adults find themselves in the middle of a political discussion or disagreement, Alvord recommends that parents find “balance” when addressing the issue at hand.

“The reality is that we are a diverse world … We have differing views and people do get upset with what’s ‘politically correct’ or ‘politically incorrect,’” Dr. Mary K. Alvord told Fox News Digital.
(Elina Shirazi)

In addition, parents should remind their kids that whatever opinions they post online these days are likely to stay online. “Nothing disappears,” Alvord said.

Also, moms and dads can wisely advise their kids, “You don’t want to get into a hot debate. You can just say, ‘I respectfully disagree, and I disagree because of A, B and C’ without calling names.”

“Don’t think you’re going to be able to assert yourself in that moment. You have to know the context.”

Alvord also noted parents can tell their kids the following: “The reality is if you’re in a crowd, and they’re protesting something and you disagree — don’t think you’re going to be able to assert yourself in that moment. You have to know the context.”

As for Friedrichs — she’s urging mothers and fathers to push back in the voting booth this fall.

If a young person begins leaning in a political direction that differs from his or her parent, Alvord advised pausing the lecture.

“Any politician supported by the so-called teachers’ unions is going to push DEI, so don’t vote for them and educate your friends as well,” urged Friedrichs, who is the author of “Standing Up to Goliath: Battling State and National Teachers’ Unions for the Heart and Soul of Our Kids and Country.”

If a child begins leaning in a political direction that differs from his or her parent, Alvord advised pausing the lecture.

“Do not get angry. Do not explode,” she said. “You have to stay calm, and you have to engage in a conversation.”

“Because if you start saying, ‘That’s ridiculous, that’s awful, that’s stupid,’ what happens is, they just can get more entrenched to prove their point.”

Then, ask what your child’s opinions are after those discussions.

“Because, they’re still young,” she said.