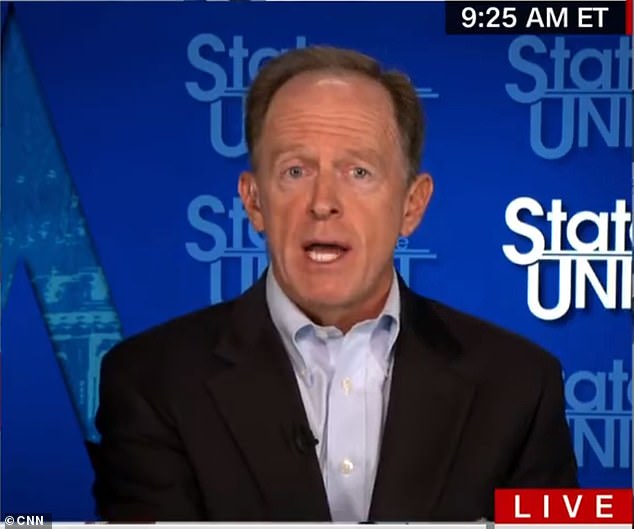 Republican Senator Pat Toomey of Pennsylvania on Sunday defended his vote against a bill that would have expanded healthcare access for military veterans who have been exposed to toxic burn pits, while accusing Democrats of using service members as political pawns.

He also appeared to take aim at comedian and activist Jon Stewart, who singled out Toomey in his criticism of the GOP lawmakers responsible for sinking the legislation last week.

The PACT Act is designed to help veterans who were exposed to toxins in Iraq and Afghanistan and now suffer a litany of health issues ranging from asthma to deadly cancers.

It passed the Senate with an overwhelming 84 to 14 vote in June but was forced back to the floor by a technical error – where it fell five votes short of the 60-count threshold to overcome a filibuster.

Toomey, who led GOP opposition to the bill, told CNN’s State of the Union that he opposed the bill this time because of ‘an unrelated $400 billion spending spree that has nothing to do with veterans and that won’t be in the veterans space.’

The bill’s text had moved the spending from the ‘discretionary’ to ‘mandatory’ category.

‘This is the oldest trick in Washington. People take a sympathetic group of Americans – and it could be children with an illness, it could be victims of crime, it could be veterans who’ve been exposed to toxic chemicals – craft a bill to address their problems, and then sneak in something completely unrelated that they know could never pass on its own and dare Republicans to do anything about it,’ Toomey said.

Republican Senator Pat Toomey led the opposition that derailed Congress’ attempt at a bill to aid veterans who were exposed to toxins in the Middle East. The Senate is teeing up another vote on it Monday

“We were promised we would have an opportunity to offer an amendment to change this and then… it was reneged on.”@SenToomey explains why he and other Republicans stalled a bill that would help provide health care for veterans exposed to toxic burn pits. @CNNSotu #CNNSOTU pic.twitter.com/YsjOEXGctc

‘They know they will unleash their allies in the media and maybe a pseudo-celebrity to make up false accusations to try to get us to just swallow what shouldn’t be there.’

He also said he was working on an amendment to the bill that he vowed would ‘not change by one penny any spending on any veterans program.’

‘My change, honest people acknowledge, will have no effect on the amount of money or the circumstances under which the money for veterans is being spent,’ Toomey said.

Interviewing Toomey was CNN host Jake Tapper, who just days ago sat down with Stewart when the comedian eviscerated the retiring GOP senator’s opposition.

Stewart continued his criticism on Sunday, claiming Toomey’s amendment ‘is really about capping the fund’ during an interview on ABC News’ This Week.

‘It’s about putting caps on it and giving it a sunset clause for ten years.’ 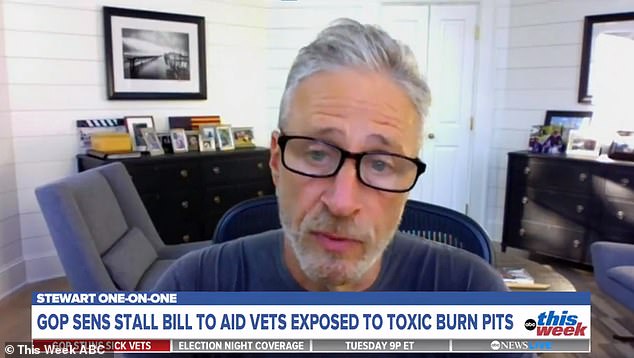 He said Toomey’s amendment would do to the bill what a previous Senate did to the September 11th victims compensation fund in setting an expiry on the money. That forced sick and dying 9/11 first responders to return to the US Capitol multiple times since 2001 to lobby for a renewal after risking their lives to save others.

‘What Toomey’s amendment wants to do is make sure that our sick and dying veterans have the pleasure that our 9/11 first responders at Ground Zero had of having to come back to Washington, hat in hand, riddled with cancer, and march through the halls of The Hill begging for money every year,’ Stewart said.

Stewart said he would ‘absolutely’ still support the bill if it passed with the amendment, but was at a loss when asked whether he believed the bill would end up passing soon.

‘I have no idea. I mean the whole thing has been — this is so bananas. Nothing changed. So, I don’t understand any of this,’ he said.

Senate Majority Leader Chuck Schumer set up another vote for the bill on Monday.